Ziada Berhane was an ambitious student at Withrow University High School, taking Advanced Placement and College Credit Plus classes. She was among the top students in her class, on her way to graduating in May 2020, with plans to attend the University of Cincinnati in nursing.

Oct. 7, 2019, tragedy struck when Ziada died unexpectedly. Ziada’s mother, Taemut Gebremedhin, told The Cincinnati Enquirer through a translator that Ziada came home from school that day and planned to do her homework upstairs. Gebremedhin said she heard a crash, as if someone fell. She called out to Ziada, but there was no response.

As far as the family was aware, Ziada was healthy. The Enquirer reported that the Hamilton County Coroner’s Office found that Ziada’s cause of death was a rare blood-clotting issue due to an irregular heartbeat, which itself was caused by an “undetermined natural disease.”

In addition to her mother, Ziada left behind her father, Amanuel Berhane, three siblings and a compassionate and saddened Withrow staff to mourn her death. Her brother, Nehome, is a senior at Withrow who also is taking Advanced Placement classes and making A’s. He has a 3.0-plus grade-point average and hopes to attend University of Cincinnati and major in engineering. Their sister, Rehsti, is an eighth-grader at Aiken High School, and another sister, Mieraf, is 1½ years old.

Gebremedhin and her children came to the U.S. from the State of Eritrea, a country in the Horn of Africa (east Africa), in 2015. They joined Amanuel, who arrived in 2011.

Ziada’s family faced the financial burden of flying Ziada’s body back to Eritrea, where all of her uncles, aunts and other family members were waiting. Their culture requires the body to be laid to rest sooner than later, so the family had to incur a lot of debt to send Ziada’s body to a final resting place. Ziada’s father, Amanuel, left for Eritrea to mourn with the family. Funerals occurred in both the U.S. and Eritrea.

FamiliesFORWARD staff members nominated the Berhane family for assistance through the Wish List, an annual fundraising campaign in its 33rd year coordinated by The Enquirer and United Way of Greater Cincinnati. Their story was one of eight selected, with hopes of raising $5,000 toward the family’s expenses. 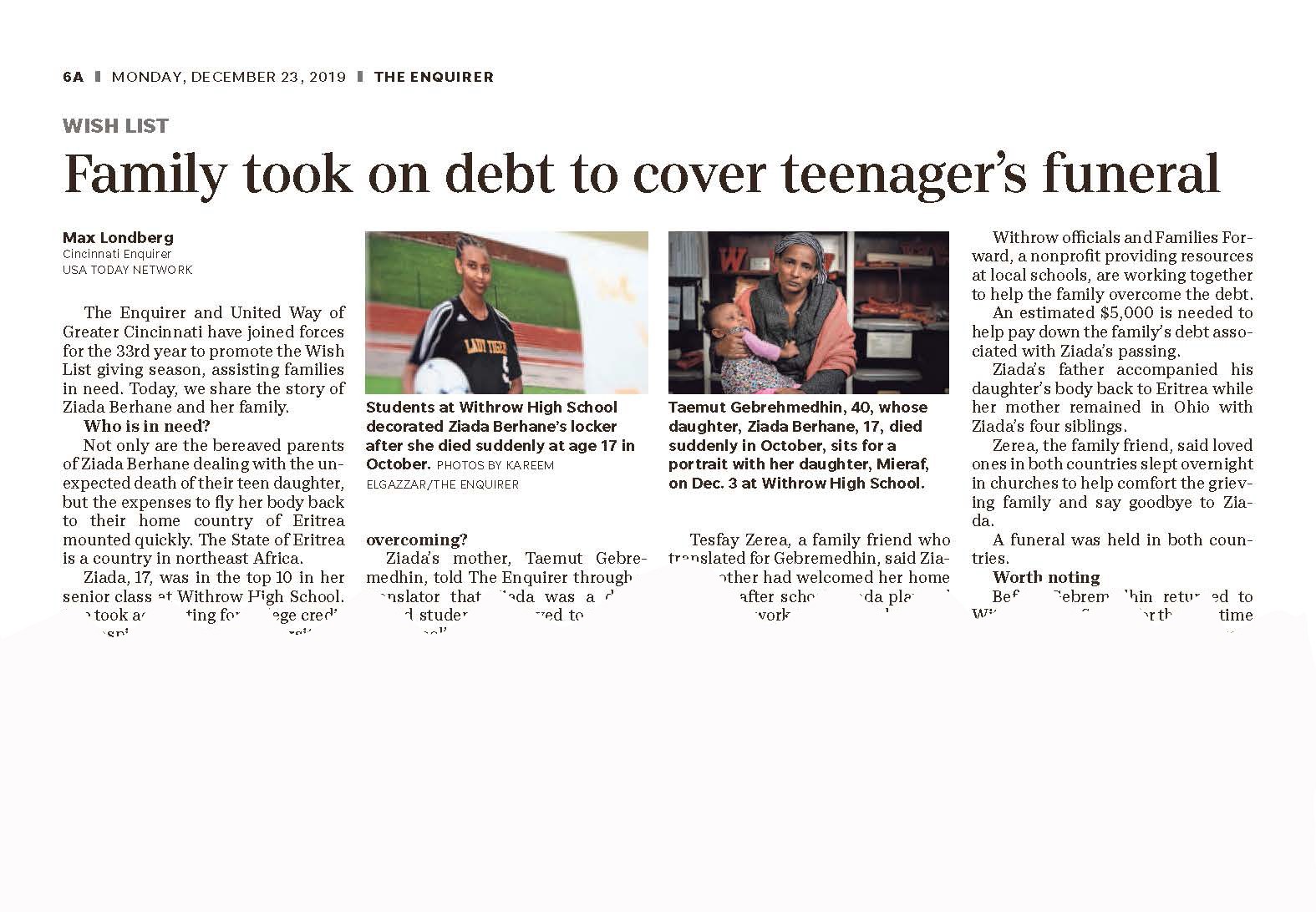