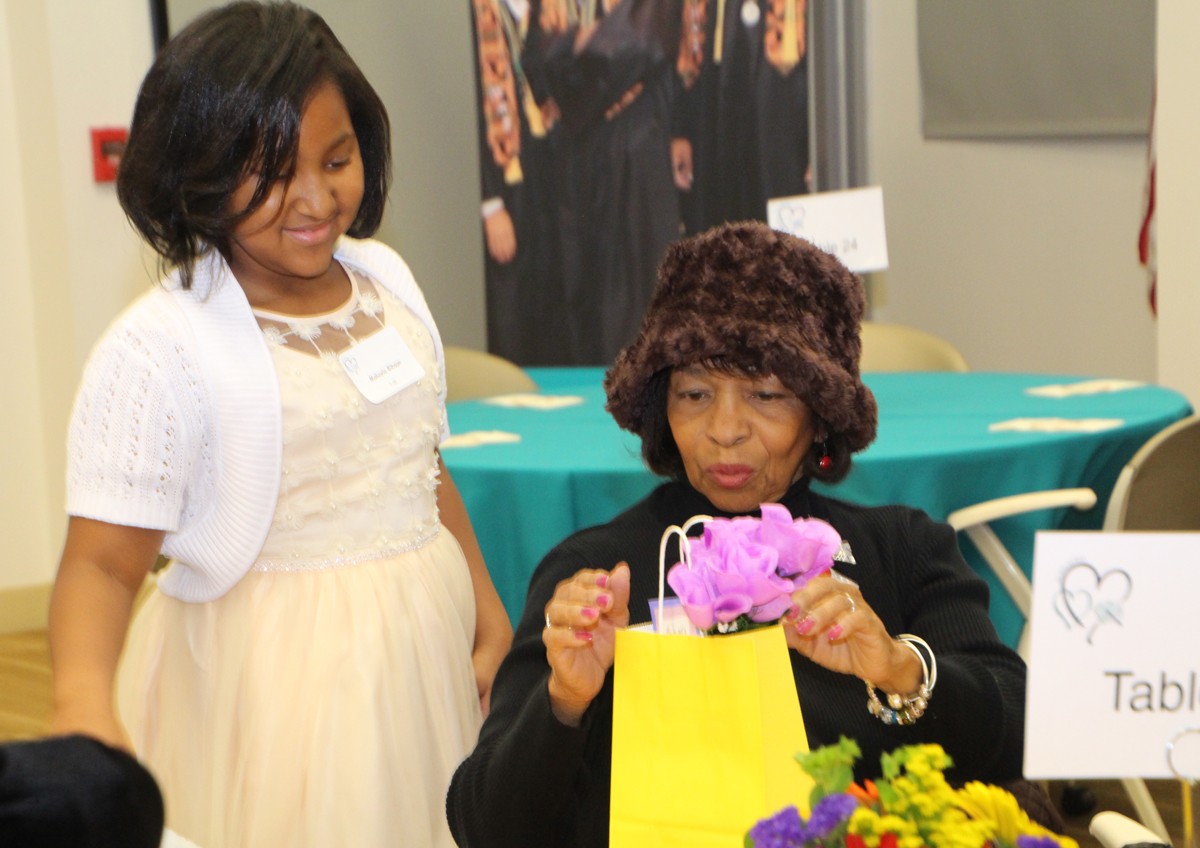 Makayla Gibson, a fifth-grader at Bond Hill Academy of Math and Science Discovery, gives a gift, a decorated glass vase, to her senior pen pal, Nancy Williams, as part of FamiliesFORWARD’s The Gifts We Share dinner in November.

Students, seniors: 'You've Got a Friend in Me'!

Dozens of students, senior-citizen pen pals and After-School Program supporters gathered in November 2019 for a formal dinner and an evening of entertainment at the United Way of Greater Cincinnati Building to celebrate FamiliesFORWARD’s “The Gifts We Share.”

The senior citizens help boys and girls with reading, writing and storytelling skills, build mentoring relationships and teach social skills. Students help keep the seniors connected to the school and community. The pen pals write letters back and forth and exchange small gifts during the school year.

FamiliesFORWARD, a United Way agency partner, started The Gifts We Share to encourage development of literacy and social skills, build respect for older adults and learn the importance of community service. Previously, it won a best-practice award from the National Network of Partnership Schools at Johns Hopkins University.

Warren Williams, director of customer service at LSNR, a mobile-payment and technology firm, served as master of ceremonies at the Nov. 7 event.

Joe Perry, a Western & Southern Financial Group employee who serves as a mentor at Withrow University High School, another FamiliesFORWARD site, spoke alongside his mentee, Ryan Moore, a Withrow junior. Perry talked about the importance of teamwork and partnership, citing an African proverb: “If you want to go fast, go alone. If you want to go far, go together.” Perry told the crowd to remember Moore’s name because “this young man is going far.”

Terrez Thomas, first-year principal at Carson School, then talked about his school’s relationship with FamiliesFORWARD, noting that the agency brings many resources to the school, including enrichments, such as 3-D Printer Club and a STEM Garden Club, and staff members who help with social-emotional skills and other support activities.

After dinner, a crowd of 118 heard guest speaker Keith Mitchell, a tax preparer and director of marketing at Kunimura Mitchell & Co. CPAs, talk about shaping the next generation through instilling confidence and helping young people pursue their passions. “The key is find the talent—encourage the talent—to become a skill,” he said. Then adults must train the young people in that skill. Adults should not just impose what they think young people should do, he said.

Reflecting on the evening’s “You’ve Got a Friend in Me” theme, Mitchell began his talk by saying: “I hate the term ‘self-made.’ It’s impossible. We all have someone — some mentor, some teacher, some principal, some minister — who helped shape us, who helped influence our lives.”

Bond Hill students then performed a skit, Carson’s choral students sang, and Hays-Porter students closed the performances by singing the theme song, “You’ve Got a Friend in Me.”

“The Gifts We Share is a way for students and senior citizens to interact and learn from one another,” Deborah Mariner Allsop, FamiliesFORWARD executive director/CEO, said. “The children learn valuable social skills, and the program also sharpens their literacy skills through writing and just talking about life situations. Some become good friends through the years.”

FamiliesFORWARD staff members also recognized some key volunteers from each school at the event. Allsop then presented the ninth annual Eula Mae O’Neal Gifts We Share Award to Fannie Shaw, a volunteer at Hays-Porter. The award was named after O’Neal because she volunteered her time to help youth for more than 50 years at Cincinnati Public Schools, the Urban League, recreation centers, child-care centers, Head Start, the YMCA and other places. O’Neal died in 2011.